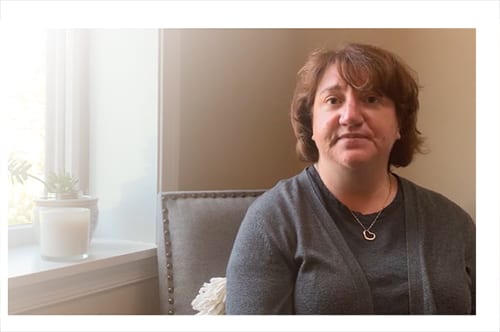 Melissa decided that it is time to share her story. She hopes by opening up and by paying it forward she will help others to understand that no matter the challenges you face in your life, you can make it through. Reflecting on her past, she recognizes that difficult times can happen to anyone and that the stigma tied to homelessness, depression, and addiction needs to be confronted.

Suffering from depression since her twenties, at 26, Melissa felt unable to cope. She reflects, “Due to family difficulties, I attempted to take my own life.”

Melissa had been working in a doctor’s office and she took a large dose of pills. As she explains, it was more of a cry for help and not knowing where to turn. She was fortunate to make it through this dark period, but other challenges, which she never anticipated, lay ahead.

Years later, Melissa married and she and her husband moved to the Eastern Shore. They were both college-educated and ready to build their life together. They were excited when Melissa became pregnant. Since her husband had a good job as a mechanical engineer, they decided that she would stay home to raise their daughter. Unfortunately, Melissa’s husband needed to have surgery. The medication he was prescribed after the surgery led him to have a pain killer addiction that then led to heroin addiction. Over time, he lost his job, and Melissa, who was working again, had to leave her place of employment because her daughter couldn’t be home alone with her husband. As challenges escalated, Melissa and her daughter became homeless.

“I don’t think that people understand that it can happen to anyone. My husband and I are both college-educated, both from middle-class families, and this is just an insidious problem that I didn’t know about until it got really bad,” she explains.

Thankfully, Melissa had been keeping track of her mental health. When she was pregnant, she was referred to a therapist at For All Seasons and maintained her relationship with her therapist through these extremely difficult years. “Being able to have that safe space to be able to come and talk saved my life . . . At the scariest lowest point of my life, I was able to get through,” she adds.

When Melissa was asked, “What would you want to say to someone who has fallen on hard times?” She did not hesitate to answer, “You have to find something within yourself – even if only small things . . . to take that next step. If you don’t have a therapist, find a therapist. If you don’t have a therapist, find a friend. There is always someone. It is my experience that strangers show the greatest kindness. There is always someone out there. There are organizations out there, there are people out there that will always lend a hand.”

Melissa says that her connection with her therapist was what helped turn her life in a new direction. For her, it was this relationship and the kindness of strangers that not only helped her get through but strengthened her resolve to give back and to go back to school to become a social worker.

When asked what she would say to someone who feels as though life is not worth living and who contemplates ending their life, Melissa shares, “That emptiness that you have – there is someone who can talk to you, who can get you to someone where you do feel comfortable telling them about how you are feeling. You really aren’t alone. It may not be a parent or a friend or someone that you would naturally think would come to your aide – a lot of times they are not equipped.”

“But, there are people on the hotlines and websites. If you can get yourself to reach out just please reach out – there is help. There really is. It will be ok. Where you are now is not where you will always be.”

Melissa is now in her third year of her Masters of Social Work program. Her therapist has noticed how she wants to advocate for other people and has asked Melissa if she might consider working in macro social work policy. When asked what she may want to do in the coming years, she responds, “I am hoping in five years that I will have taken my life lessons and turned that into paying forward everything that was given to me. I volunteer at the shelter where we lived. All I can do is hope to keep paying forward the kindness that was given to me.”

December 16, 2020 No Comments on Melissa’s Story –A Message of Hope in the Face of Depression and Suicide
prev post next post

For All Seasons (administrator)