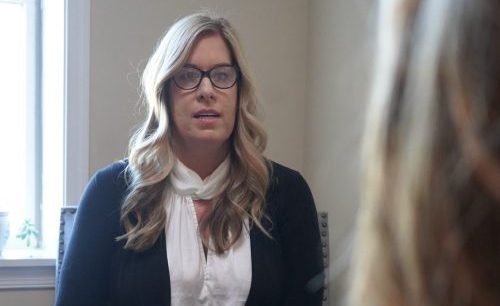 According to the National Sexual Violence Resource Center (NSVRC), now more than ever, screens and technology connect us with romantic partners, friends and family, co-workers, and strangers alike. For too long, harassment, cyberbullying, sexual abuse, and exploitation have come to be expected as typical and unavoidable behaviors online.

NSVRC adds, “Forty-one percent of Americans have been personally subjected to harassing behavior online, and an even larger share (66%) have witnessed these behaviors.”

In April, during Sexual Assault Awareness Month, For All Seasons will be sharing the stories of victims of sexual abuse as a way to bring more awareness to acts of sexual violence online. The following is the story of a For All Seasons client who experienced sexual abuse after connecting to a perpetrator online (the client’s name has been changed to provide anonymity):

Lauren, a 16-year-old teenage girl, was acting out of character and her father grew concerned. Wondering what might be troubling her, he examined her cell phone for clues. After looking through her Facebook and Snapchat accounts, as well as reviewing her location history, he learned that Lauren had become a victim of human trafficking and online sexual exploitation. He discovered that Lauren had been lured into posting sexually explicit photos and videos on social media, which led to in-person meetings, and travel across state lines with predators who threatened her life and raped her. Lauren feared for her life and did not know how to respond. Together, Lauren and her father reached out to law enforcement, who began investigating and prosecuting Lauren’s assailants. For All Seasons’ Victim Advocates were referred to Lauren and her family, who offered support and guidance through the healing process. The advocate connected the family to a For All Seasons Therapist and one of our case managers who coordinated additional community supports.

This year, the National Sexual Assault Awareness Month (SAAM) campaign’s call to action is “Building Safe Online Spaces Together.” The campaign theme builds on last year’s theme “We Can Build Safe Online Spaces.” This year’s theme focuses on building online communities centered on respect, inclusion, and safety — where harassment, assault, and abuse are taken seriously. A safe online space is inclusive, where everyone is treated with respect and dignity.

To prevent other crimes like this from happening, For All Seasons has developed and implemented educational campaigns to help young people and their caregivers navigate online safety and awareness of human trafficking. The NSVRC suggests the following to prevent online sexual assaults:

• Improve skills around asking for consent and respecting the answer, challenge jokes that demean others, and maintain and model healthy relationships.

• Encourage children to respect others’ boundaries and bodies, challenge unfair gender stereotypes, and treat others with respect.

• Speak out when you see harmful comments that blame victims for what happened to them, you can respond by refocusing accountability on the perpetrator.

• Improve policies and practices within faith communities, community organizations, workplaces, and schools to ensure everyone is treated fairly. Screen staff and volunteers and train them frequently on healthy behavior and boundaries.

Kristy Mirando, Director of Victim Services at For All Seasons, comments, “We all have a role in keeping others safe online. It could be as simple as stepping up and reporting things when we see harmful content or comments online. The more we can work together as a community to be vigilant, the more we can address this growing problem we are facing throughout our community.”

As technology has evolved, abuse has grown as well. Some acts are identified as criminal under the law, while still too many acts of sexual violence online are normalized and not taken seriously. Sometimes violence is initiated online and then takes place in person, and in other instances, the violence takes place entirely behind screens.

For further information and to find support for online sexual assaults, visit forallseasonsinc.org or visit the National Sexual Violence Resource Center at nsvrc.org.

Caption: Pictured is Kristy Mirando, Director of Victim Services at For All Seasons.

For All Seasons (administrator)