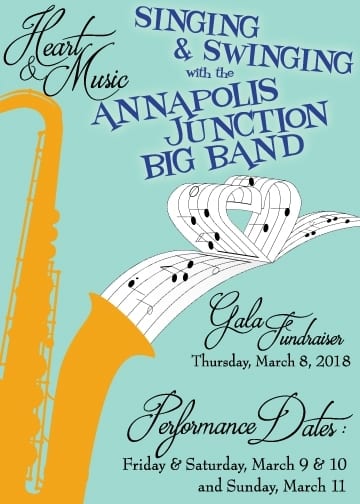 Save the Date Heart & Music

For All Seasons, The Behavioral Health and Rape Crisis Center brings you the swinging sounds of the big band era for year eight of “Heart & Music”,  on March 8, 9, 10, & 11 2018 at the Oxford Community Center.

Big Bands flourished in popular culture during their heyday in the Swing era during WWII. They have been a part of jazz music since they began in the 1920s when concert bands adopted the rhythms and musical forms of small African -American jazz combos. Big Bands evolved with the times and continue to entertain today.

This year Director Ed Langrell brings the swinging sounds of a great era to perform Broadway music, classic songs, and songs from today, Big Band style.  The talented cast of “Heart & Music” meets the delicious arrangement of saxophones, trumpets, trombones, and rhythm section from the  Annapolis Junction Big Band. Founded in 1991 by trumpet player Jim Tavener, the Annapolis Junction Big Band has been delighting audiences in the Baltimore/Annapolis area for over 20 years.

Join the cast and crew for a show packed with fun, talent, and entertainment when “Heart and Music” opens with the Gala Celebration, Thursday March 8, co-starring a delectable dinner catered by Occasion Catering, culminating in the rhythms of Big Band.  Tickets for the Gala are $125.  Show only performances are $25 for adults and $10 for Students K-12, are Friday and Saturday, March 9 and 10, at 8pm and at 2pm on Sunday, March 11.