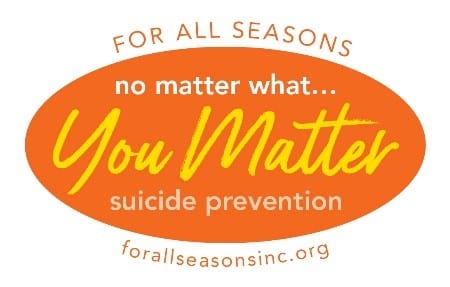 The kick-off event around For All Seasons suicide prevention campaign, No Matter What . . .  You Matter, will be held on Friday, October 5, 2018, from 5 to 8 p.m., at the Bartlett Pear Inn at 28 South Harrison Street in Easton.

No Matter What. . . You Matter Campaign
Targets Suicide Prevention

According to the Center for Disease Control (CDC) every 13 minutes someone dies by suicide and for every suicide, 25 suicide attempts are made. This fall, to help create awareness about this community mental health issue, For All Seasons kicks off its 2nd Annual NO MATTER WHAT . . . YOU MATTER Suicide Prevention Campaign the week of October 5 through 13, 2018.

The Campaign kicks off on Friday, October 5, 2018, from 5 to 8 p.m., at the Bartlett Pear Inn at 28 South Harrison Street in Easton. The free event will include champagne and hors d’oeuvres and live music. The event is part of the First Friday stroll through the local galleries and shops in Easton and provides the opportunity to learn more about what For All Seasons is doing to help those in crisis. The Campaign is being organized by For All Seasons Committee Members Diane Flagler, Allie Prell, and Amy Steward. All are welcome.

Suicide does not discriminate, affecting people of all genders, ages, and ethnicities. Many different factors may contribute to someone making a suicide attempt. For All Seasons hopes that by discussing the signs and symptoms associated with suicide that it can raise awareness about the issue in our community.  Because family and friends are often the first to recognize the warning signs of suicide, they can be critical to helping an individual find treatment with a provider who specializes in diagnosing and treating mental health conditions.

According to the Center for Disease Control (CDC), for every suicide, 25 suicide attempts are made. For All Seasons wants people to know that If they think a friend or family member is considering suicide, they should reach out and start a conversation. Talking openly about suicidal thoughts and feelings can save a life. The following are three steps to help people begin the conversation:

Beth Anne Langrell, Director of For All Seasons, comments, “For All Seasons hopes through this campaign to create an ongoing dialogue with agencies about this growing issue in our communities.  The campaign will include dialogue circles, educational outreach and community events.  We want people to know that no matter what, they do matter.”

Throughout the year, For All Seasons brings awareness to the community about such issues as suicide, sexual assault, trauma, and mental health needs.